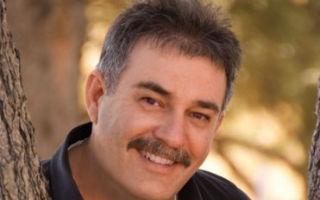 My dad got me interested in country music at a very early age but I started in country radio in 1977 while in High School in Tucson, Arizona at KCUB-AM, a country station that was also the leading station in the market and Billboard Station of The Year in 1977 and its owner Jim Slone was inducted into the Country Music Hall of Fame in 2016. It was here I learned, studied and played the best country music from the 1940’s, 1950’s, 1960’s and at the time, the 1970’s.

I worked for Atlantic Records as the Southwest Regional Promotion Manager from 1989 to 1996 helping secure the careers of Atlantic artists like Tracy Lawrence, John Michael Montgomery, Neal McCoy and many others. I’m still friends with Tracy and last time I saw him in Denver, Colorado we had a chance to play golf! Tracy’s a great golfer so I mostly just drove the golf cart! I still have a lot of great friends in the country music industry.

Most recently, I was a network air talent for Westwood One in Denver, Colorado as the morning host on the Classic Country format and heard around the nation on over 200+ radio stations.

Along the way I took my love of country music to local stages playing in country bands and this is how that got started: I was given a guitar by my cousin Larry before the age of 10. Later at age 12 I took guitar playing a little more serious learning chords and songs out of the church sing-along books. Fast forward Highlights of the 90’s; I played pedal steel and road managed The Hutchens out of Nashville while their debut single was at country radio ( “Knock Knock” ) and their video playing on the country music cable outlet, TNN (The Nashville Network – Now Spike TV). We’re still friends to this day and I’ve always loved their Bluegrass-influenced music.

I was lucky enough to play pedal steel and lead guitar in the studio on Texas Artist Aaron Watson’s first CD, Texas Cafe.  We met at one of the Country Showdown Talent contest in Abilene, Texas and I was honored to play on his music projects.

I’m also an artist endorser with Furious Slides. I’m in a special group of artists who have found the Furious Slides to be the best quality steel guitar slides ever made. Please check out the Furious Slides webpage for more information and lots of pictures of the other endorsers, I bet you may of heard of a few!

Now I’m a proud member of the best radio station ever, Country 106.9! I appreciate any and all of the time you spend listening in the mornings from 5:30am to 10am. I look forward to meeting as many of our listeners as I can, so please look for me at various events around our area and say hello! My wife “Lady A” and I are excited to be a part of the community!