Reba McEntire and Terri Clark at the T-Mobile Center on Friday, November 18th 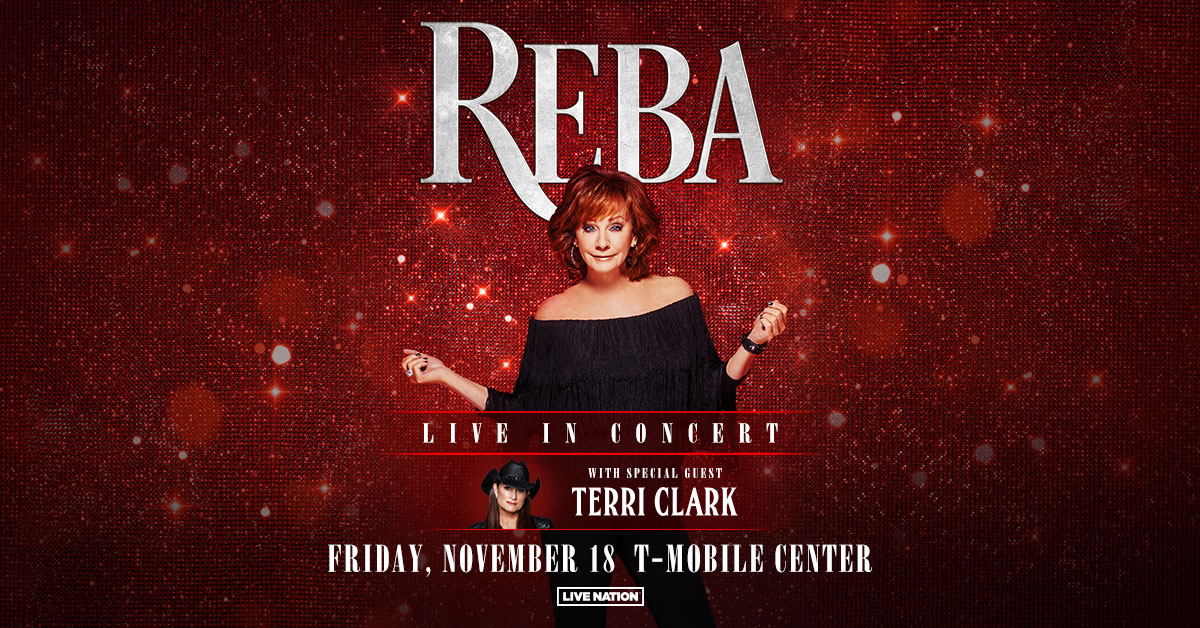 Nashville, TN – July 11, 2022 – Reba McEntire has announced a fall arena tour REBA: LIVE IN CONCERT, set to kick off October 13 in Lafayette, LA. With 35 No. 1 hits under her belt, the award-winning entertainer will deliver hit after hit during her “entertaining and flawlessly executed” (Pittsburgh Post-Gazette) live show. Presented by Live Nation, the 17-city tour will feature special guest Terri Clark across all shows. “I can’t wait to see everyone out on the road again this fall,” said Reba. “We had so much fun in the spring and
I’m ready to get back out there with my buddy Terri Clark!” Tickets for REBA: LIVE IN CONCERT go on sale Friday, July 15 at 10 AM local time. Reba fans can access a special fan presale starting Thursday, July 14 that 10 AM local time. Use password ELECTRIC

About Reba McEntire:
Multi-media entertainment mogul Reba McEntire has become a household name through a successful career that spans across music, television, film, theater and retail. The Country Music Hall of Fame and Hollywood Bowl member has won 16 ACM Awards, 15 American Music Awards, 9 People’s Choice Awards, 6 CMA Awards, 3 GRAMMY® Awards, a GMA Dove Award and was a 2018 Kennedy Center Honors recipient, in addition to multiple philanthropic and leadership honors. Reba has celebrated unprecedented success including 35 career No.1 singles and selling over 56 million albums worldwide. Reba recently earned her 60th Top 10 on the Billboard Country Airplay chart, extending her record for the most Top 10 hits among female artists. Reba’s Top 10 success spans across five straight decades and lands her alongside only George Jones, Willie Nelson and Dolly Parton in the achievement. The Oklahoma native and Golden Globe® nominated actress has 11 movie credits to her name, a lead role on Broadway in Irving Berlin’s Annie Get Your Gun and starred in the six-season television sitcom Reba. Her brand partnerships include Dillard’s, REBA by JustinTM and she was named the first female and musician to portray KFC’s iconic founder Colonel Harland Sanders in their celebrity colonel campaign. For more information, visit www.Reba.com or follow @Reba on Facebook, Twitter, and Instagram.

About Terri Clark:
Hailing from Medicine Hat, Alberta, Canada, Terri Clark got her start by playing for tips at Tootsie’s Orchid Lounge, a legendary honky-tonk bar across the alley from Nashville’s historic Ryman Auditorium. The 3-time JUNO Award winner holds the honor of being the only Canadian female member of the legendary Grand Ole Opry. Terri has received 19 CCMA Awards and in 2018 was inducted into the Canadian Country Music Hall of Fame. In 2016, Terri took to the airwaves in a whole new way with Country Gold with Terri Clark. The internationally syndicated radio show can be heard on over 170 stations across the USA and Canada and has garnered Terri CMA and ACM nominations for her hosting duties. With over 5 million albums sold, hit singles such as “Better Things To Do,” “Poor Poor Pitiful Me,” “Girls Lie Too,” “Northern Girl,” and “I Just Wanna Be Mad,”a slew of awards and sold out audiences on both sides of the border, Terri has solidified her place in the history.