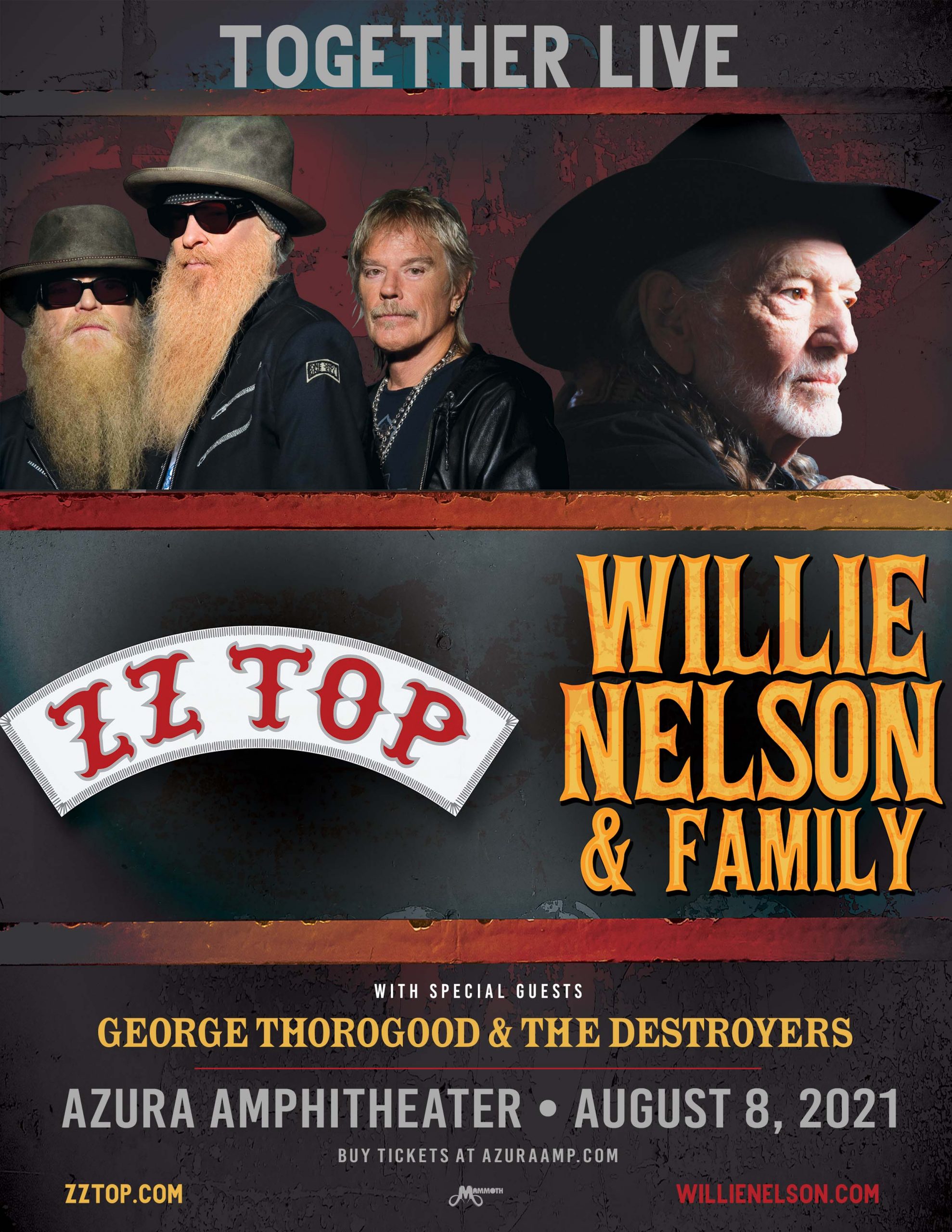 ZZ Top and Willie Nelson are coming together LIVE for a show at the Azura Amphitheater in Bonner Springs Sunday, August 8th. This show has been rescheduled from it’s previous 2020 cancelled show.

ZZ Top is a legendary American rock band known for their blues-infused rock music, bawdy lyrics and long, red beards. ZZ Top live shows leave the audience laughing dancing and feeling like they are at a jam session with close friends, instead of a concert headlined by rock and roll legends. Their massive success has allowed all of their albums to reach gold or platinum status.

The band’s best selling album is 1983’s Eliminator, which spawned the hit singles “Legs” and “Sharped Dress Man.” The album went on to sell 10 million units, reaching diamond status and the 25 million records they’ve sold in the U.S. makes them one of the top 100 selling artists in the country. ZZ Top has sold more than 50 million albums worldwide, and they were inducted into the Rock and Roll Hall Of Fame in 2004.

Willie Nelson is one of the most successful country music singer-songwriters in history, releasing 68 studio albums and 10 live albums. He wrote his first song at the age of seven and joined his first band at ten, playing concerts as a lead singer and guitar player while still in high school.

He spent the ‘50s and ‘60s writing songs for established acts such as Ray Price and Patsy Cline, as well as releasing a string of albums on Liberty and RCA beginning with his debut …And Then I Wrote in 1962. In 1973, he signed to Atlantic Records and put out Shotgun Willie, which veered into outlaw country, a stark contrast from the mainstream Nashville sound and clean-cut country artists of the era. 1975’s Red Headed Stranger and 1978’s Stardust followed on Columbia Records, both garnering commercial and critical success.

The ‘80s saw the release of No. 1 albums Honeysuckle Rose, Somewhere Over The Rainbow, Always on My Mind, and The Promiseland, as well as Nelson joining Johnny Cash, Waylon Jennings, and Kris Kristofferson in the country supergroup The Highwaymen, touring and releasing three studio albums between 1985 and 1995.

Nelson continues to release a new album almost every year and delight ticket buyers in live shows to this day.