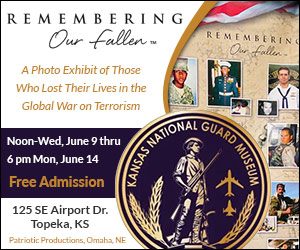 The Museum of the Kansas National Guard at Topeka Regional Airport is hosting the national “Remembering Our Fallen” memorial to those who have given their lives in the Global War on Terrorism since 9-11, from June 9 to 14 at the Museum.

The 5000+ photo exhibit on 34 ten-foot towers can be found set up in front of the Museum on this 20th anniversary year of the 9-11 attack.  The exhibit was scheduled to be at the Kansas State Fair in Hutchinson in 2020 until the Fair was canceled.

An opening ceremony is scheduled for noon on Wed, June 9, with Gov. Laura Kelly opening the exhibit and a special wreath-laying ceremony by Gold Star families.

The annual Heartland Military Day will be held on Sat, June 12.  It will include battle re-enactments, concerts by the Topeka Big Band and the Fairlawn Road Swing Band, a speech by Gen. George Patton, and displays of military equipment.  A Pancake Feed will be held from 7 to 10 am.  Visitors will be given the opportunity to ride in military vehicles and try on military uniforms and equipment.

June 9 - June 14
Museum of the Kansas National Guard
125 SE Airport Drive
Topeka, KS 66619 United States
Connect With Us Listen To Us On